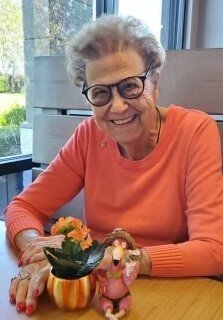 Margaret Palo, 92, died on December 10, 2021 in the exceptional and compassionate care of the Good Shepherd Hospice House staff in Auburndale, FL. She was born on October 16, 1929 to Eugene and Marie Klein in Iowa Falls, Iowa. She was predeceased by her parents, brothers Edward, Herbert, and Victor, and her loving husband of 47 years, Harry Palo. She is survived by her children Ann McCarty (Todd) of Winter Haven, FL, Paul Palo (Bronwyn) also of Winter Haven, FL, and Gail Palo (Lee) of Tallahassee, FL, and her grandchildren Padgell Palo of Atlanta, GA and Peyten Palo of Winter Haven, FL.

Margaret was known for her love of sports which started when she played basketball in high school. She also met Harry there, but they didn’t marry until May 18, 1952 when he returned from his service in Korea. In the meantime she became a Registered Nurse and eventually loved working in the operating room.  After they married Margaret continued to work as a nurse so Harry could finish college and dental school. She also continued her love of sports by supporting the Iowa Hawkeyes and becoming an avid fan of high school, college, and professional football, basketball, and baseball. She loved to sit in the press box of the local high school football games, listening to the play-by-play. March Madness was her favorite time of year.

Margaret and Harry decided to leave the cold winters of Iowa and move to north Florida in 1961. It still wasn’t quite warm enough so they landed in Winter Haven in 1962. While Harry started his dental practice, Margaret concentrated on being a mother for her three children. She also volunteered as a school nurse and was Den Mother to a Cub Scout troop. She eventually added the role of bookkeeper for Harry’s practice. For fun, if she wasn’t watching sports on TV, she was playing bridge. She became an outstanding bridge player and loved getting together with her many friends to play cards and laugh. She loved to play cards of any kind and played right up until the end.

The beach was one of her favorite places, so Margaret and Harry bought a condo on Longboat Key. They spent many weekends at the condo where she took long walks on the beach and enjoyed the fantastic sunsets. While on her walks, Margaret became an expert shark’s tooth spotter and collector.

Wherever Margaret went she lit up the room with her fun-loving personality and great sense of humor. She will be missed by her family, neighbors, and all the many, many friends who also loved her.

In lieu of flowers please consider making a donation to Chapters Health Good Shepherd Hospice https://lifepathhospice.chaptershealth.org/GSHGeneralDonation 1-866-204-8611. A service will not be held at this time.

Share Your Memory of
Margaret
Upload Your Memory View All Memories
Be the first to upload a memory!
Share A Memory